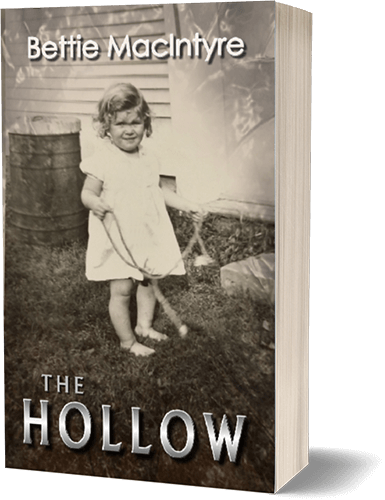 The Hollow is Irene’s story, and the loving relationship between a grandmother and granddaughter. A pathology of metaphorical memories in short story form. Irene was born at the onset of WWII, in a small town at the Elephant Mountain’s foothills, known as The Hollow, in Vermont. Her parents sought employment in Connecticut to support the industrial war effort, leaving their infant baby, Irene, with her elderly grandparents. Her gram became her mother, who taught her at an early age about life, death, and rebirth at a systemic level, and how to embrace it with love.

Prayer and church were the basics of the family, and a foundation that followed her throughout life. A naive country girl whose best friend was Bessie, the cow. Gram taught her to read and write from the Bible. She experiences her grampa’s death, the birth of a baby sister, and in a brief time, her mother’s passing. All the stories are heartfelt embedded memories; from Irene’s gram teaching her to swim, and her fifth Christmas present, a red hair ribbon. Throughout her life, she had the greatest love and foundation a child could possess. She promised she would care for her gram and sister and, in their end, validated it with a final kiss. The Hollow is a poignant, sensitive story readers of all ages will enjoy.

"There is something very special about the bond between a grandmother and her granddaughter. Irene spent her early years living with her grandparents, developing a loving relationship with her grandmother, or Gram. Born in a small town in the foothills of Vermont, at the beginning of the Second World War, Irene’s parents had to leave their daughter behind with her grandparents while they sought work elsewhere. It was a difficult time. But for Irene, it seemed perfectly normal. She had her loving grandparents and a best friend, Bessie, the cow she learned to milk every morning. Irene learned so much from her grandmother, but perhaps the most important thing she learned was love. As Gram said to her, “One of the most precious things in life is to be loved.” Bettie MacIntyre’s creative nonfiction/memoir, The Hollow, is a charming look at a bygone era, a simpler life, and a loving relationship between a grandmother and her granddaughter. The plot develops from Irene’s early years through her growing up years as the bond intensifies. Irene learned so much from her grandmother, including how to read (Gram used the Bible to teach her reading skills). As she matures, Irene carries with her that special love her grandmother shared, as well as all the other priceless things she was taught. And then, when it comes Gram’s turn to leave behind her earthly body, Irene, saddened at the loss, knows what to do as she sits beside her dying grandmother: “We need to sing praises to make Gram’s passing a pleasant trip. She always says that singing is good for the soul.” This is a compassionate story, told with care and loving attention to detail."
Emily-Jane Hills Orford for Readers' Favorite Rakuten Kobo

Find out about new books, tour dates, and giveaways first. We don’t share your info and we’ll only contact you with big news. Promise.